Microsoft dropped support for the popular Windows 7 operating system as well as Windows Server 2008 R2 in January 2020 except for business and Enterprise customers who pay the company for extended support. 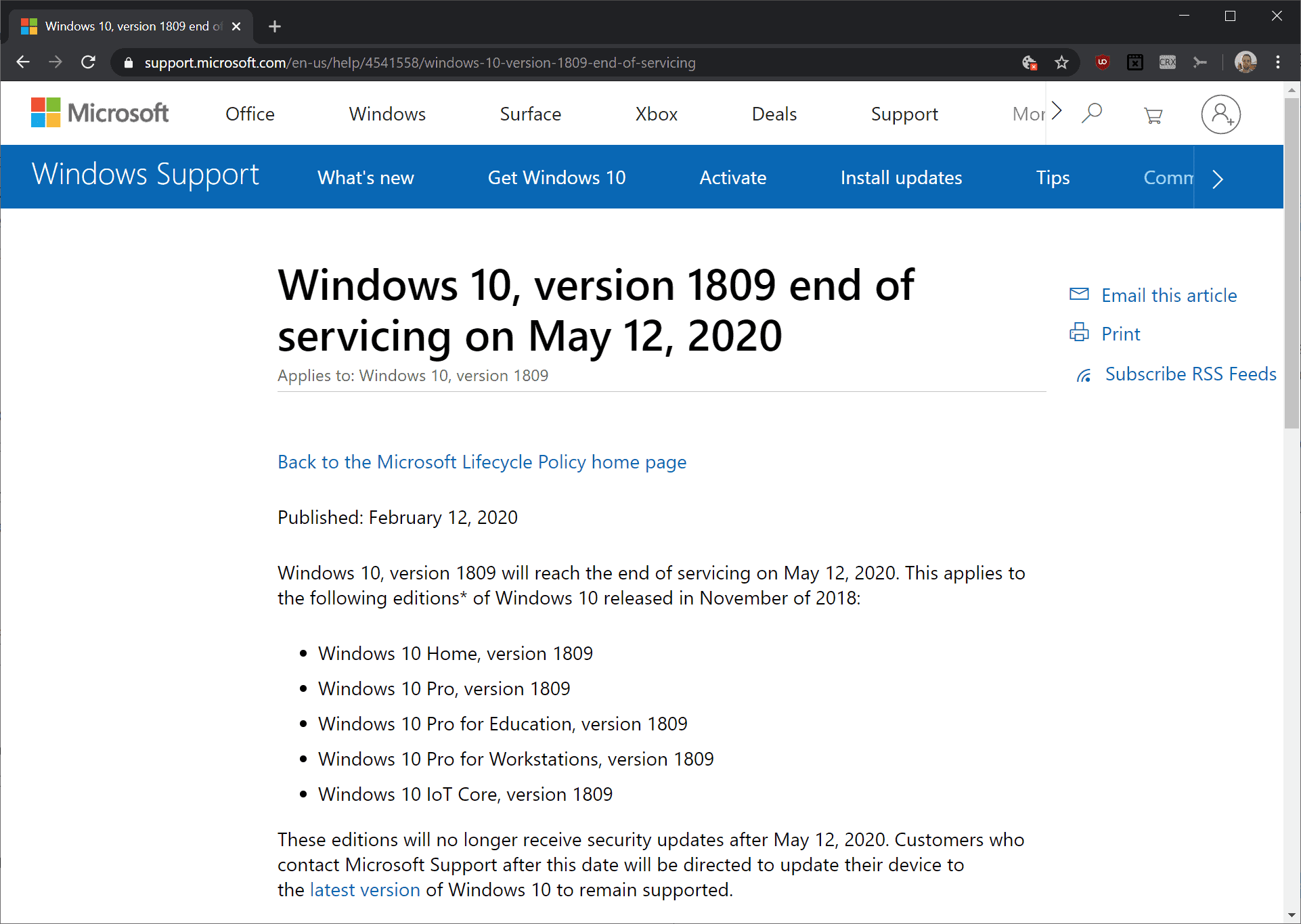 The support page KB4541558 reveals that several editions of Windows 10 version 1809 will reach end of support on May 12, 2020. The data coincides with Patch Tuesday of May 2020 which means that Microsoft will release security updates for the versions that reach end of servicing on that day for the last time.

Microsoft unveiled Windows 10 version 1809 on October 2, 2018 officially. The company had to pull the release shortly after general availability because of seriousbugs that it contained. Among the many issues were confirmed reports of data loss, bluescreens, media playback issues, reset Settings, startup issues, issues with mapped network drives, and font display issues.

It took Microsoft until December to increase the roll out speed of the operating system version again; the issues made Windows 10 version 1809 arguably the worst release of Windows 10 yet from a bug point of view.

Devices running Windows 10 version 1809 will receive security updates for three months before support ends (unless Enterprise or Education editions). Upgrades to newer versions of Windows 10 are available and most systems should be able to receive these upgrades via Windows Update or other update options.

More in this category: « Microsoft Edge is coming to Linux Microsoft delays update settings for Windows 10 »

With the coronavirus affecting every corner of the globe, every market is feeling the strain, this is hitting us hard. ...

Call of Duty: Warzone hooks more than 30 million players in only 10 days

In just a over a week, Call of Duty: Warzone looks to be having a good run at wedging its way into the battle-royal mark...

France’s top court has recognized the right of an Uber driver to be considered an employee, a ruling that could upend ...

Oracle To Axe 1,300 Jobs In Europe according to Report

A reported as stated that Oracle is planning to implement a significant number of job losses in Europe. ...

Millions of websites could need to refresh security certificates

Millions of websites could today malfunction due to a bug in their security certificates. ...

What's New on BritBox and How Much Does it Cost?

BritBox is the latest streaming service to compete against the likes of Netflix, Amazon Prime Video and Now TV. ...

According to a new report from Datto, the cost of downtime caused by ransomware infections has “skyrocketed”. ...

Apple has gone even further with a new “Pro” version, which adds active noise cancellation (ANC) to an already tempt...